This is the big question we frequently get – “Is Medisoft v19 ICD 10 Ready?”

The answer is “Yes”, with conditions.

Medisoft version 19 has all of the ICD 10 features and tools that you need for the ICD 10 transition. However, if there are any issues that need to be fixed for ICD10, version 19 will not be updated. As always, only the current version will be updated, which is currently version 20.

Upgrade to version 20 for peace of mind, and always stay on the current version to receive the latest updates, hotfixes, patches, and the best features.

When Medisoft version 19 was released late 2013, it was released with all the required elements necessary to make the transition to ICD 10 in October 2014 (which was the due date at the time). While the government may have stalled the release of ICD 10, McKesson did not stop innovating and improving Medisoft for its users.

In March of 2015, the current version of Medisoft (version 20) became generally available with all new features for enhancing patient intake using the Mobile App. The ICD-10 features in Medisoft v20 are in fact identical to those available in v19. However, the ICD 10 features have not been fully put to the test yet.

Don’t get me wrong, the product was built to the ICD 10 specifications available at the time and was tested to the extent it could be, but unlike a typical beta period where it could be tested end to end, payers and clearinghouses were simply not ready to test at the time of release.

What makes ICD 10 so challenging is that in essence payers, clearinghouses and end users all needed to have products released and ready to test with each other. So in essence we are all in beta together. Had the October 2014 date stuck, v19 would have been put to the test, and in the industry of ever changing government/payer/clearinghouse requirements, McKesson would have supported changes to the product because it would have been their current version.

Now that version 20 has been released, if there are any required changes or updates, then those updates will only be written for version 20 as it is McKesson’s policy to only support the current version.

The truth is nobody knows if an update will be necessary or not. The problem is there are still a lot of unknowns with ICD 10. We like the rest of the industry are still holding our breath to see if all the meticulous development efforts meet the demands of payers and clearinghouses- remember we are all in beta together!

What we can tell you is that providers and payers are actively engaging to complete testing and we are monitoring these exchanges closely.

From our decades of experience in the industry we can also tell you that small patches and fixes are a normal/expected part of working with any newly released software. This is the biggest change in the medical industry in 35 years, and across the board all software systems that have to communicate with each other are all being updated and going through the same process you are.

We are encouraging all of our users to stay in front of ICD 10 by participating in testing, but even the time to do that is starting to run short. If you discover any issues as you test it should be reported to our support department so they can be addressed and resolved as quickly as possible (typically through a software patch/hot fix).

Remember that clearinghouses and payers are also working on updated software in “test mode” so they may make adjustments on their end or change requirements that McKesson will then be forced to respond to. Once we are past the testing phase we will all move to go-live, and on October 1, 2015 the industry as a whole will experience their first live action using the new codes and submitting claims.

Users, and clearinghouses, and payers may still discover that there are little glitches here and there that didn’t come out in testing. The simple truth is testing doesn’t always catch all of the problems and some things may need a little fix or a small update to fix a certain feature.

In these events, McKesson will issue a hot fix, or an update to the software, and as always, it will only be for the current version. At this time, Medisoft v20 is the current version and is the only version that will get any sort of update to fix any of these small issues.

The summary of that long explanation is that Medisoft version 19 has all of the ICD 10 features and tools that you need. If there are any issues that need to be fixed, version 19 will not be updated, only the current version will be updated, which is version 20.

Do You Need To Upgrade From Medisoft 19 To Medisoft 20?

If you are currently using Medisoft version 19, as far as we know you have the tools needed to bill and submit claims with ICD 10 codes. But, you should be aware that you are running a risk that if or when any bugs or issues are discovered, you may find yourself in a situation where you need to do a last minute upgrade because your software is no longer supported.

The good news is that to upgrade to version 20, that is called a one-version-old upgrade, and you will receive the biggest discount available for the new software.

It is always your cheapest option to upgrade to the latest version from the prior year’s version. Staying on the current version is also the way that you can ensure that your practice will get updates to the software when needed, and you’ll always have the latest features.

If you feel the need to upgrade to Medisoft version 20 to be sure that your software works best for ICD 10, we’ll be happy to help you out. 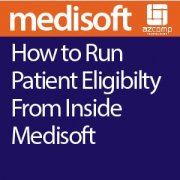 Medisoft Training – How to Run Patient Eligibility From Inside Medisoft

How to Fix Claim Rejections Because of No Procedure Code Description

The All New Medisoft Mobile App For Medisoft Version 20

This website uses cookies to improve your experience while you navigate through the website. Out of these, the cookies that are categorized as necessary are stored on your browser as they are essential for the working of basic functionalities of the website. We also use third-party cookies that help us analyze and understand how you use this website. These cookies will be stored in your browser only with your consent. You also have the option to opt-out of these cookies. But opting out of some of these cookies may affect your browsing experience.
Necessary Always Enabled
Necessary cookies are absolutely essential for the website to function properly. This category only includes cookies that ensures basic functionalities and security features of the website. These cookies do not store any personal information.
Non-necessary
Any cookies that may not be particularly necessary for the website to function and is used specifically to collect user personal data via analytics, ads, other embedded contents are termed as non-necessary cookies. It is mandatory to procure user consent prior to running these cookies on your website.
SAVE & ACCEPT
Call Now Button